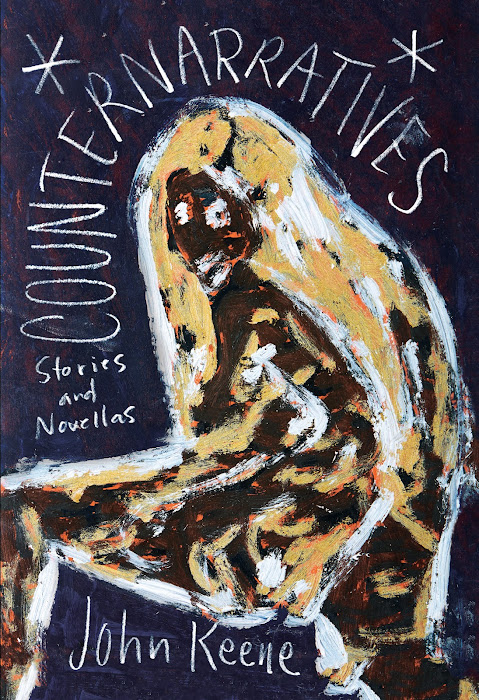 Counternarratives is a fantastic project, expertly realized. I think it’s important to start there. John Keene’s new collection of stories and novellas centers on nothing less ambitious than the history of the New World. Its three parts—“Counternarratives,” dealing mostly with the colonial conquest of North and South America; “Encounternarratives,” centered (mostly) around prominent post-civil war American figures (Langston Hughes, W.E.B. Du Bois, the composer Bob Cole, an aged Jim of Huck Finn fame); and “Encounternarrative,” which consists entirely of one story, “Lions,” written as an exchange between two dictators of a former colony discussing their legacies.

From the first story, “Mannahatta,” in which an early black sailor aboard a Dutch ship founds his own private slice of America, Counternarratives presents the simple but incredibly important premise, too often ignored, that black people were there too. They were present in the colonization of Brazil; in the lead up to the American Revolution as a repeatedly-escaping slave finds his life “insufferable under any circumstances but his own liberation”; in the Civil War as Colonel James Rivers finds that, even in an interview ostensibly focused on his service, all anyone wants to hear about is his trip down the river with that white child; they were present in the Golden Age of the Harvard philosophy department and the art movements of impressionism and modernism and any other narrative by which we know our history. And as my “mostly”s indicate, Keene makes the case that our histories and legacies are both far reaching and intimately connected, from the Counterreformation in New Lisbon, to early modern Paris (that haven for black artists), to young queer Mexico City.

Not that the book feels didactic, or dry. Keene most definitely has something to say, but in each story he lets his subjects speak for themselves in their own voices. In his first part, these voices take the forms of letters, newspaper clippings, diary entries, and mock-histories, as if each narrative were designed to be slipped into an academic reader on, say, “The Ideological Origins on the American Revolution” and these stories were simply left out—which, as it happens, they were. (The complete title of the story is “An Outtake from the Ideological Origins of the American Revolution,” and concerns the above-mentioned escaped slave.) My favorite of these is the longest piece in the collection, the novella “Gloss, or the Strange History of Our Lady of the Sorrows.” The story is presented as a literal footnote to a history of early American Catholicism, and in 75 pages shifts between the biography of a mute slave girl named Carmel living in revolutionary Haiti:

Carmel was the lone child among the handful of bondspeople remaining at Valdoré, the coffee plantation to which Olivier de L’Écart returned in late July 1803. The estate, over which his elder brother Nicolas had presided for more than two decades, clung like a forget-me-not to the cliffs high above the coastal city of Jérémie, west of the Riviére Grand’Anse, in the southern district of the colony of Saint-Domingue. Nearly all of Valdoré’s able-bodied bondswomen and men, who at the height of the estate’s prosperity numbered more than one hundred and twenty-five souls, had fled or been slain during the successive waves of liberation, revolt and redistribution that had convulsed the colony since the first flash of rebellion in France.

To Carmel’s diary entries after she’s sent to live in a Nunnery in Western Kentucky to serve her mistress Eugénie, where she studies Latin on the sly:

so v.v. cold the creek a knife of ice sky same color today we shovelld off the roadway down to the fence and the town mlle E sd to me but not to me bc she is not speakg to me parts of the town of Gethsiminy is froze over the nuns send some breads & soup down but the revd mayor refusd I polishd mlle E new boots from her tante Mme Françoisfrancis & sweaters sewd her collars & tear in her cape she haves another book fr her tante on my cot but when I sd merci she ignores me after a while she gone out quo puelle fugit rido latin sentences & 1 rosary bef slp

To Carmel’s own lush internal voice, as she finds herself within another early American form—the lurid tales about the strange goings-on within American monasteries, complete with crashing thunder, magic, and dead fetuses, used at the time as anti-Catholic propaganda:

One night following a day so hot that it appeared to have scorched much of the foliage to a brown fur, I woke to hear Eugénie creeping past my bed. The room was black as the moment before a nightmare. [E]veryone in the convent was usually so drained by the heat that they slept as if drugged.… She tossed several things into a cloth sack, replaced the floor stone and bustled out of the room. When I was sure she was halfway down the hall, I trailed her.

This voice-hopping, to this reader, feels exhilarating. Each speaker comes across as fully realized, set against its own incredibly detailed historical backdrop, and they combine to create what feels like a full glimpse into each story’s time, people, literature and history—fuller even, as the book suggests, than one could receive through an official history.

The second section, “Encounternarratives,” consists of a set of encounters between historical figures and the people and events that work to control, change, and define or mis-define them. As in the first section, the voice of each story is an extraordinary pastiche of both its chosen era and its theme. For example, the story “Acrobatique,” about the 19th Century acrobat Miss La La and her encounter with the impressionist painter Degas who would immortalize her, is written as one long rushing sentence—the words engaging in the same battle as Degas’ portrait to express her movement in a static medium:

[S]omewhere far down there, below, from the sandy circle of the circus floor or a seat in the lowest ring of tiered chairs, plus haut! the voice I can easily discern, it’s the ringmaster’s, the crowd’s, the words…fleet and fluttering, soaring, past me up the rafters, scattering among the trusses, vaulted arches, the cupola, clambering amid the bats and the blackbirds, across the brickwork seen only by its masons and ghosts, though I see it…

And in “Rivers,” the story that will likely get this collection the most attention, the voice of James Rivers struggles to lend dignity to a character seen as a caricature by both his original creator and the world he lives in:

When did you get yourself down this way?” Sawyer said, his razor lips cutting me with a smile. “Cause I reckon soon as you knew you had got your freedom we all woke up to find you gone.”

I thought to tell the boy that although once Huck and I got back and I learned Miss Watson’s will had freed me, a man in town, LaFleur, and his brothers, all later to take up arms for the Confederate cause, would come to the stables where I worked and keep on making jokes about selling me back into bondage since Washington had cut off trade and our bodies were a premium further south down the Mississippi, so I planned to out resolving the matter once and for all by crossing to the other side, practicing a number of times when I knew the tide was low, since I knew how to swim and even a blind man in a blindfold behind a high blind wall could see Illinois from Hannibal…

Instead I said, “I was working in Chicago for a few years then I decided to come back home. I posted my bond to stay here, have been working steadily and decided to settle down.”

Similarly the third part, “Counternarrative,” is written as a pastiche of a Beckett play, as two voices in an empty room discuss memory and forgetting, love and destruction, power and fear.

To this reader, the chameleon-like range of the writing is impressive. The book as a whole feels like an entry from Oulipo, the French writer’s collective devoted to prompts and restrictions, but like a really good Oulipo book. One whose writer is invigorated by the challenge posed by each prompt, and uses each as an opportunity to explore his pet themes—freedom and control, legacy and hauntings, the influences of religion, and queer love throughout history. Each story is a surprise and a success, and cumulatively they come together to feel vital. This is an important book—it’s important to own, to read, to teach, and to slip in your shelf beside the classic narratives that it’s in conversation with.

But, the petty part: You will need to use Google to read this book. I did. A lot.